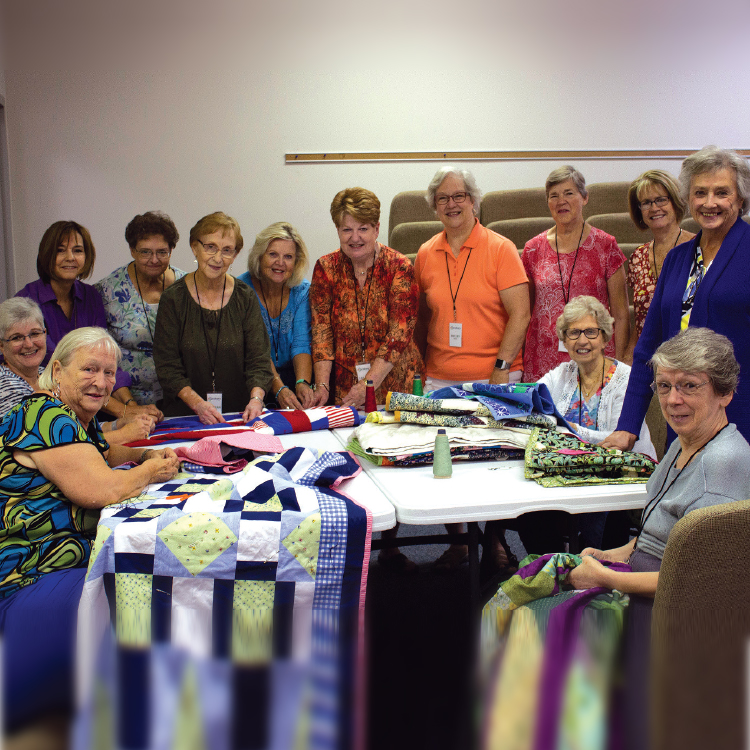 My name is Melody Welch, and I started the Prayer Quilting Ministry in September of 2009 at Calvary. As we celebrate 10 years of this ministry, I look back and am reminded of the goodness of God and all that He sustained me through to bring me to this day.

I have lived in the Winston-Salem area my entire life. I grew up in a very broken and dysfunctional home where I was not loved. I was allowed to go to church when I was young, and it was there that I learned that there was a God that loved me, which was something I had a hard time comprehending because I did not feel that anyone could possibly love me. I accepted Jesus as my Lord and Savior as a child, and while I still struggled with accepting His love, He was what sustained me during the hardest times of my childhood. It was in the church at the age of 14 that I met Tommy. He has always been the angel I asked God for, and the greatest blessing of my life. He cared deeply for me, and he loved me without asking for anything in return.  He asked me to marry him when we were 18, and we tied the knot a year later. When we were 22, God blessed us with boy-girl twins after doctors told us we would never have children. The next several years were good, but the difficulty and the baggage from my childhood remained.

Then after a series of terrible events when I was 40, I hit the lowest part of my life. I was very sick, in and out of various hospitals, and I had no will to live. The Enemy convinced me I was useless and that God could not and did not love me because I was just too damaged. Because of this lie, I continued to struggle with my physical and mental health over the next few years. Then I had a major medical emergency and my heart stopped twice. The doctors told Tommy that they didn’t think I was going to make it, and that if my heart stopped one more time, they would not be able to revive me. During that ordeal, I remember only one thing: I was laying in the hospital bed, barely holding on to life, and suddenly a man appeared at my bedside and said: “Stop this. I am not finished with you.” And by the miraculous work of God, I survived.

God redeemed me from complete brokenness and put me into a ministry where I can love on people that are hurting.

We were not attending church at the time. While I would take the kids so they could be part of various programs, we did not go as a family. We had been hurt at our previous church, so while we still read our Bibles often, we had walked away from corporate worship for a season. The day before Easter in 2001, I was back in the hospital and Tommy was driving on Highway 52, and he happened to see a billboard advertising a sunrise Easter service at Calvary. He decided to go, and he immediately felt loved and at home there. When I got out of the hospital, we both attended and felt like the Lord was calling us there. We found a Bible Fellowship class that loved us and prayed for us often, especially me, and while I was grateful to have found a church home, I still struggled at times. I would find myself in the worship center, surrounded by thousands of people worshipping the Lord, yet I felt completely alone. But God continued to remind me of His love, and it was then that I began to slowly heal.

During my health crises, God brought many things into my life to help me process and heal: therapy, doctors that loved the Lord, and, the most surprising, quilting. I was not working at this point, and Tommy encouraged me to find a pastime that brought me joy. His mother gave me a sewing machine, so I began to learn how to quilt using YouTube tutorials, and I slowly began to learn the basics. I later had an opportunity to take a quilting class through Forsyth Tech, and my love for it only grew. A friend from my quilting class talked about starting a quilting ministry, which piqued my interest and I agreed to help her, but God closed every door. I started to question if this was really the direction God wanted for me. Why would the Lord gave me such a passion for something, then not allow me to use it? I had even been given several sewing machines and fabric and other supplies by women who said “God told me to give this to you,” so I started asking God “what are you doing?”

We were members of Calvary by this time. Tommy asked me if I had considered starting a quilting ministry at Calvary. I laughed and said that Calvary was so big, they probably already had one. But Tommy convinced me to ask, so I did, and to my surprise, I discovered that they didn’t. So I began the process of starting a quilting ministry at Calvary, and in 2009, I got that opportunity, I was so nervous; leading was not what I had in mind or a strength I felt I was had but I was trusting God. I told Him, “I will give this ministry two weeks, and if no one shows up, I will have kept my promise to You.” The first week, we had 31 women sign up, and the second week, we were told that they were looking for a bigger room to accommodate all the ladies. This was not at all what I was expecting, but God was leading, so I followed, and He is still leading today.

Since then, this ministry has been a blessing to many people. We meet on Wednesday mornings and we make prayer quilts for people who are sick or in some sort of difficult situation. We also make fidget quilts for Alzheimer’s and dementia patients. Once the quilts are made, we have a pastor come and pray over them and they tie a knot in one of the quilt ties, symbolizing a prayer said. Then we either hand-deliver the quilts or we mail them, some going all over the world. We also follow up with a card made by the Calvary LoveNotes Ministry telling them we are still praying for them. Looking back, I am amazed at all that the Lord has done. We have been able to love on the hurting, widows, and orphans, and we have been able to share the Gospel with many, and we have also seen quilt recipients use their quilt as a way to share God’s love with many more. God redeemed me from complete brokenness and put me into a ministry where I can love on people that are hurting. My past brought me to the lowest of valleys, but God has used that season of my life in order that I might love others in that valley and not judge them, but walk in love alongside them.

In 10 years, we have made 987 quilts and we have prayed for thousands of people. This ministry is God’s, not mine or Calvary’s. From the very start, it has been about the prayers, not the quilts. The quilts serve as a tangible gift of God’s love to those who are hurting. Every day, I ask for God to lead this ministry with His direction, wisdom, and instruction. Out of the brokenness of the people we have served, and even out of my own life, He has woven a beautiful tapestry, and I cannot wait to see what it looks like after the next ten years and beyond.