A Story of Love 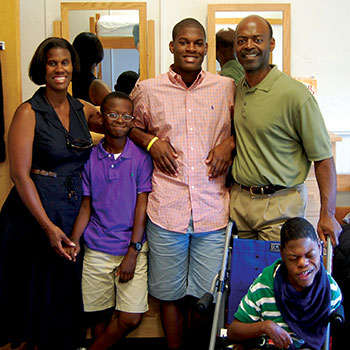 My name is Joyce and I had the incredible opportunity to be a mom to a very special young man named Joshua for 18 precious years.

My water broke unexpectedly on the morning of January 8, 1997. I was a little over 24 weeks pregnant and Joshua was not due until the end of April. Joshua was born on January 13, 1997. He was 13 inches long and he weighed 1 pound 9 ounces. He was small enough to fit in my husband Ben’s hand.

Joshua was in the NICU at three different hospitals for the first year of his life. Joshua came home January 24, 1998, with 12 hours of nursing seven days a week. It was such a joy to have a nurse who taught us to treat Joshua like a child and not a fragile patient. However, we faced numerous difficulties where doctors wanted us to believe the worst for Joshua.

Because I need people and fellowship, I had to get out of the house. I refused to leave Joshua behind, and it was a joy to take him with me. Our oldest son, Benjamin was just 15 months older than Joshua and he gave us a reason to visit the playground every day. When Joshua was 2 years old he was diagnosed with cancer and he had chemotherapy and surgery to remove the tumor from his liver. When it was safe for Joshua to keep up with Benjamin, he did, oxygen tank and all.

When Joshua was four years old, he came off of oxygen and we found out a short time later that I was pregnant with our youngest son, Nathaniel. This gave Joshua new opportunities for play dates, playground visits, and parties. Benjamin was very active in sports at this time and Joshua enjoyed being outdoors at soccer, baseball and eventually football and lacrosse games for both of his brothers. Basketball games were the perfect winter outing, as well as going roller skating with his brothers’ Scout troop. Joshua LOVED the disco lights!

As a family, we participated in 5K runs. Benjamin would finish first, Ben would push Joshua, Nathaniel ran along beside them (when he was old enough), and I felt comfortable running in the very back of all of the runners. We went to the Children’s Theatre and museums, and we enjoyed performances at The Steven’s Center to see operas (although we told Joshua that he could not sing with them!). We were able to take advantage of many wheelchair friendly places and got to visit Disney World, the beach, go skiing (Joshua went tubing and laughed the entire time), and we even got to travel throughout the United States for various sporting events. What may have appeared to many to be a very difficult situation become our greatest joy: to live life to the fullest with our sweet Joshua. Unfortunately, he died months before we took our Midwestern tour to see Milwaukee (Brewers) and Chicago (Cubs) but we still look at every location from Joshua’s perspective. Ben and I wanted the boys to see that we could, in fact, “. . . do everything through Christ, who gives me strength.” (Philippians 4:13 NLT)

Joshua died unexpectedly on April 23, 2015, but his legacy does not end there. The outpouring of love that we continue to receive has been a true gift from God. Because we had “community therapy” when Joshua was alive, we received and continue to receive love now that he is singing with the angels in front of his Savior. We have created a fund in his name to help families that have children with special needs have fun. The fund will pay for registrations for 5K and Fun Runs, as well as registration for husbands and wives to attend marriage seminars to keep them strong. As the fund grows, we will support family vacations to specified locations that we travelled to with Joshua. Students at Nathaniel’s school supported a fundraiser created by one of the captains of the lacrosse team by purchasing “Never Forgotten” shirts that say “Joshua” on the back. The night following his death, cross town high school lacrosse rivals honored Joshua’s life with a moment of silence. When we met with someone from Hospice in their counseling center, she listened to the love that we were receiving and felt that we were going to be “alright”. I told the counselor that I grieved when Joshua was born prematurely and God helped me, now I just needed to grieve in reverse. Recently, our family was invited to the Christmas dinner for Joshua’s Bible Fellowship class with Pure Ministries. Each year the young adults in this class donate a monetary gift to a specific organization based upon what they collected throughout the previous year. This year they gave their donation to the Winston-Salem Foundation for the Joshua Carson Fund. Their act of generosity and love blessed us as we continue to grieve into the second year, which can be harder than the first. The teachers in the class and the members in it meant so much to Joshua and to us. It was a class uniquely created by God for Joshua and the love that they give to us helps us to know that God is our Comforter. For a child who was not able to use words to speak, he said a great deal about the love of Jesus to many.

After thanking God for the time He allowed me to have with Joshua, I realized that I was given the opportunity to face a very difficult situation, raising a medically fragile child with special needs for eighteen years, with His joy and peace. Thank you God, for allowing me the joy of being Joshua’s mom.