A Story of Obedience 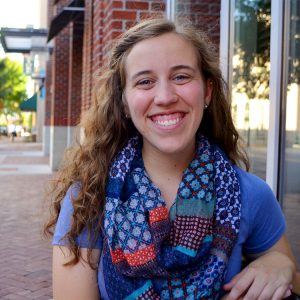 When I was in high school my family began attending Calvary, and I was able to plug into this precious church family right away. Though I had been a follower of Jesus for quite some time at that point, God used this transition to completely transform me. Through serving, fellowship, discipleship, and the reading of God’s Word, I began to learn more fully what it means to walk with Jesus. My eyes were opened to the reality that being a Christian is not simply about my morals or character, but about journeying with Jesus wherever He may lead.

Because Calvary has a desire to reach the lost in Winston-Salem, North America, and all over the world, I began to realize how small my plans were for my life. Around the time I left to attend college, God was stirring within me a passion to be used by Him in the lives of people that do not know Him. I had grown up in a Christian home and had been following the Lord for the majority of my life, so I wanted to spend time in places where the Christian culture is not as prominent. Initially this looked like going on short-term mission trips and spending my summers serving with different ministries in Winston-Salem. Eventually though, I began to realize that this passion was going to impact my life in a long-term way.

By the time I finished college, I was ready to go wherever the Lord would send me. I wanted to be used by Him for His Kingdom. However, I still had a lot to learn. God sent me back to Winston-Salem to teach middle school for a few years. During this season I relearned, in my heart and not just in my head, what the Great Commission is truly about. If I really wanted to be used by God for His Kingdom, it could not be limited to just a trip and a week or defined by location. Being part of the Great Commission should be as natural and as integrated in my life as breathing. It should look like having a genuinely broken heart for the lost I encountered every day.

By the time I finished college, I was ready to go wherever the Lord would send me. I wanted to be used by Him for His Kingdom. However, I still had a lot to learn.

As God was teaching me these lessons, He was preparing me to transition my life to Calgary, Canada. I had been on a few summer trips with Calvary to help some of our partner churches with camps, and through that I began to realize God was leading me to plant my life there long-term. I’ll never forget one specific encounter I had while in Calgary in the summer of 2015.

I had already been praying about whether or not the Lord wanted me in Calgary long term, and then I met a girl about my age who was a Sikh. My group and I began talking with her, and someone asked her “What do you know about Jesus?” Her answer was heartbreakingly vague: “Uh, something about a tree and some nails?” In that moment, I realized that I was looking at the face of someone who truly had no idea who Jesus was. The Lord used that exchange between our group and that young woman to help make it clear that He wanted me in Calgary. This transition was long and required many steps of faith. There were times I looked at the decisions I was making and wondering if they were even the right ones. However, through prayer, wise counsel, and scripture, God confirmed that this was the way He was leading me. Even in the assurance of this next step, there were so many days I was filled with fear and uncertainty. Over and over again, though, God proved Himself faithful and trustworthy, and I began to learn that I can take Him at His word.

Now, as I am living in Calgary, I realize that the journey and the steps of faith are not over. God is teaching me that wherever He leads us, it is never about our plans or agendas, but rather joining Him in what He is doing and how He is working. The most important part of it all is not the lists and tasks, but the opportunity to walk with our Savior wherever He may lead us.