A Hard Time With Change 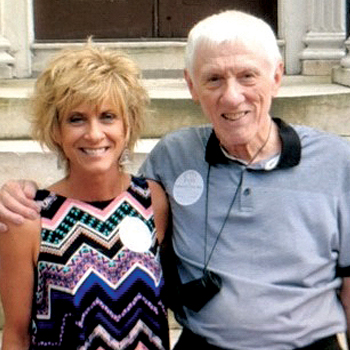 My name is Sharon and I have always had a hard time with change.  What about you?

We all seem to find comfort in doing things in the same manner and in the same way. Especially after reaching middle-age, you feel you’ve had enough life experiences to know who you are and what has and hasn’t worked in the past. You know what has helped you survive life’s ups and downs. It makes sense to do what is familiar and what you have been used to. We truly rely on our own schedules, routines, personal agendas, and personal checklists. Mine had certainly seemed to work for me over the years.

Surprisingly, a year and a half ago, my life did change – both course and direction – and in the most significant and redeeming way possible.

As a child, I grew up in a Christian home. My family attended church regularly and I have fond memories of spending time there.  However, as I got older, I detoured away from the church. Having a religious lifestyle became less and less important to me and other things took priority.

In March of 2015, at age 54, my life was running pretty smoothly. First, I was nearing the end of my 19th year as an elementary school teacher and was contemplating retirement.  Second, as a long-time single parent, I had now become an “empty-nester” and was happy that both my adult children had found good steady jobs and were doing well. Third, I was getting excited about a summer business venture and was frantically taking action to make it become a reality beginning in June.

On the Friday evening, a week before Easter 2015, I felt a stirring in my heart I had never felt before. I started reading a book called Your Scars are Beautiful to God by Sharon Jaynes.  As I began soaking up the words in that book for two nights, I knew I would be accepting the invitation my 82 year old father routinely gave to me to attend church with him on Sunday. This was extremely out of character for me, as I had not had a desire to attend church for 35 years.

As my dad and I walked together arm-in-arm toward the doors of Calvary on that Sunday morning, my legs were shaking. I wanted so much to be there, but felt so extremely uncomfortable. As we sat on a back row, listening to the choir, the songs, the sermon, I became completely overwhelmed. I began crying uncontrollably and had to leave.

I began Easter Sunday by going to the service at the Lawrence Joel Coliseum again with my father.  There was such an overwhelming restlessness in my heart as I watched, listened, and took part in the inspiring event.

Once I returned home, I turned on my TV and began watching the mini-series, “The Bible.” For the next five hours, I was captivated by everything that the screen was showing me.  For the first time, I was truly becoming acquainted with Jesus and I recall feeling as if I were actually there with the living Christ – going through his life, listening to the words he was saying, and feeling the love he was giving to others. During the crucifixion scene, I wept uncontrollably. I then got down on my knees, and begged for forgiveness.

It is said that in God’s time things shall pass that are for His glory.

That Easter day, I looked on my bookshelves to find a Bible.  I had acquired several over the years and found a red hardback one that appealed to me.  I had absolutely no idea what I was doing. I didn’t even know the name of most of the books.  It felt so awkward looking through the pages of this untouched, but precious book. I felt uncomfortable, but knew that this was the beginning of a relationship with both this book and with God.  There was a strange excitement in my heart that I had never experienced before. By the end of the day on April 5, 2015, the Holy Spirit had consumed my entire being. An unexpected peace fell upon my heart. I felt the weight of a boulder being lifted off of me. I think I truly exhaled out loud…

I did no big business project that summer as I thought I would.  I actually did nothing I had planned.  I did what I suddenly had an overwhelming desire to do: I listened to respected ministers, sermons, videos and broadcasts. I sat at my kitchen table and read my Bible, a book I had not opened for 35 years; a book I previously had no desire or interest in reading.  Now, I suddenly thirsted for the knowledge it contained.  The still small voice of God told me to sit still and take in His Word.

My life was forever changed that Easter Sunday.

It was not due to anything that I can reason other than Divine Intervention. I was not actively seeking a lifestyle change or a relationship with Christ. I am truly blessed to have had the Holy Grace of God come down and open my eyes to the Truth. My life is so much more fulfilled. I have an inner peace I never had before.

It is said that in God’s time things shall pass that are for His glory.

It still amazes me that at age 54 it was finally time to start getting my life in order and to start understanding that it wasn’t all about me anymore; that my life wasn’t in my control; that it was time to surrender; that to feel complete meant to follow Jesus and be a light in the world for Him and to show others His glory; and that what I should be looking forward to what was far and above what I had ever known.

I am so very grateful that my Heavenly Father thought enough of me to change me into this new person. I was regenerated into a daughter of Christ.

I came to faith in Jesus Christ that Easter Sunday afternoon and my journey since then has been no less than phenomenal! The priorities that I had given all my attention in life suddenly did an “about face” and much time has been spent learning, studying, seeking, and discussing God’s Holy Word; building a personal relationship with Christ through prayer and quiet meditation; and connecting with others who inspire me. I have gotten baptized and become a member of Calvary. I am involved in Bible Fellowship, have attended Wednesday night classes, been a volunteer in several ministries, have worked various church functions, taught Kids Camp at Southside, and have been an active part of the F.R.O.G. ministry there. While I am nowhere near perfect, I am beyond grateful for where God has brought me thus far, and I look forward to where my journey with Him takes me.